Investigating Genre: The Case of the Classic Detective Story 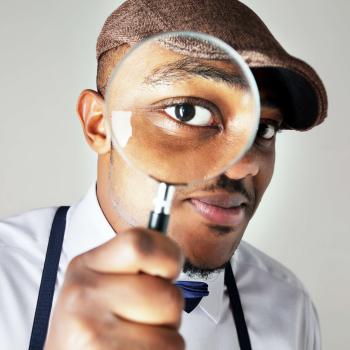 The mystery genre is in some ways the most stable and recognizable of the genres of fiction, but its popularity has lead to updating, altering, and critiquing its conventions. In this lesson, students examine a somewhat controversial list of conventions for the mystery genre before analyzing The Hound of the Baskervilles for these traits. They then write an original mystery and, after peer feedback, compose a reflective essay that explains their choices within and against the genre conventions.

This lesson was adapted from The Hound of the Baskervilles Teacher's Guide, written by Katherine Shulten and published by WGBH Educational Foundation, (c)2003.  A Sherlock Holmes series, set in modern-day London, is available through PBS's MASTERPIECE.  Go here for more information.

"Because genres are responses to social situations (and situations are always changing)," Deborah Dean asserts in Genre Theory: Teaching, Writing, and Being, "genres cannot be fixed" (10). In this lesson, students interact with a genre that is so predictable as to become formulaic: the classic detective story. Although "a certain amount of stability is essential for genres to carry out action," students can be encouraged experiment with and push the boundaries of a familiar genre since different examples of a genre "are never exactly the same since no two situations are exactly the same" (10).

This site provides some background on Ronald Knox and lists the “commandments” he
made for the genre of detective fiction.

This guide provides ideas and resources related to the mystery genre, Sherlock Holmes,
and the reading and viewing The Hound of the Baskervilles, which originally aired on
PBS's Masterpiece in 2003.

Containing a biography, fimography, and section dedicated to the character of Sherlock Holmes, this site offers a wealth of resources related to Doyle and his works.

Grades
3 - 5
|
Lesson Plan
|
Recurring Lesson
Genre Study: A Collaborative Approach
Students explore multiple genres through genre studies. They record evidence of genre characteristics on bookmarks as they read, and finish by giving a book review for their classmates.
Grades
9 - 12
|
Lesson Plan
|
Standard Lesson
Recording Readers Theatre: Developing Comprehension and Fluency With Audio Texts
Students investigate audio texts of mystery stories, evaluate them in terms of both literary and audio qualities, and create Readers Theatre scripts, which they use to record their own podcasts.
Grades
6 - 8
|
Lesson Plan
|
Unit
Everyone Loves a Mystery: A Genre Study

Students track the elements of mystery stories through Directed Learning-Thinking Activities, story maps, and puzzles. Then they offer clues for other readers as they plan and write original mystery stories.

Grades
9 - 12
|
Lesson Plan
|
Standard Lesson
Ghosts and Fear in Language Arts: Exploring the Ways Writers Scare Readers
Students analyze scary stories to 'break the code" of horror writing and use what they learn to write scary stories of their own.
Grades
6 - 8
|
Lesson Plan
|
Unit
Expository Escapade—Detective's Handbook
Students create a Detective's Handbook based on a detective mystery they have read. The handbooks include expository and descriptive writing, as well as a letter.
Grades
9 - 12
|
Professional Library
|
Book
Genre Theory: Teaching, Writing, and Being
Dean synthesizes theory and research about genres and provides secondary-level teachers with practical classroom applications.
Grades
3 - 12
|
Student Interactive
|
Organizing & Summarizing
Cube Creator

The interactive Cube Creator helps students identify and summarize key elements. It can be used as a prewriting or postreading activity.

The Mystery Cube helps students identify and summarize story elements in this popular genre. It can be used as a postreading or prewriting activity.

Grades
9 - 12
|
Calendar Activity
|
Historical Figure & Event
Scotland Yard was established this day in 1829.
Students explore the resources on the Scotland Yard website and compare the advice given to London's citizens to the advice available from the local police department.