Language and Power in The Handmaid's Tale and the World 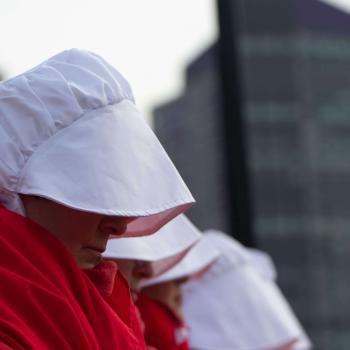 In Margaret Atwood's The Handmaid's Tale, the narrator, Offred, regularly interrupts the narrative flow of the text to contemplate the meaning of certain words and phrases.  Often she finds that the meanings of words have changed since the revolution in Gilead, the fictional society in the novel.  In this lesson, students work in small groups to examine Atwood's use of these language musings, as well as neologisms and Biblical language, in an assigned chapter.  Students then share their findings with the class.  Through this activity, students can see the integral role that control of language and abuse of Biblical language play in the totalitarian government of Gilead and the specific ways that Offred challenges that control by the simple act of thinking and writing about language.  This activity can be extended to include an analysis of power and language in our own world.

Although the activities and resources in this lesson refer directly to The Handmaid's Tale, the approach can be applied to a number of Other Books that Focus on Language and Power.

Examining Language in The Handmaid’s Tale Teacher Notes: these notes are a guide for teachers to use with the accompanying student handout.

Copies of The Handmaid’s Tale by Margaret Atwood

Teaching Them to Read: A Fishing Expedition in The Handmaid's Tale (Bergmann)

In her College English article "'Teaching Them to Read': A Fishing Expedition in The Handmaid's Tale," Harriet F. Bergmann argues that the novel "presents its reader with an exercise in learning how to read for survival" (847).  Specifically, she calls attention to "Offred's survival through language.  In order to stay alive, she learns to use the new language of her own time so as to seem part of the new order that the language reflects.  She quickly understands how much she had failed to value language as Gilead deprives her of word and text.  She then learns to read the subtext of the new culture and so to subvert the illusion of absolute power created by its language" (848).

Just as Offred learns to read the language of her time, students must learn to read the texts teachers give them in the classroom, as well as the language of their time.  Through examining the "multiple ironies," of language in The Handmaid's Tale, students will see the connection between Atwood's specific use of language and the larger themes of the work (848).  Additionally, they will practice the skills necessary to read how the language of power is used in their own world.

New Words from the Seventh Update of the Merriam-Webster Dictionary

AskOxford: How new words get into the OED

Using the example of the word “e-tailers” (electronic retailers), the process of how a new word is added to the Oxford English Dictionary is explained.

This site creates tag clouds from the top 100 words used in “presidential speeches, official documents, declarations, and letters written by the Presidents of the US between 1776 – 2007.” Words that are used more frequently show up in a larger font.  Students are able to scroll through the tag clouds and see how words and phrases come into and out of favor in official communication.

The Handmaid’s Tale: A WebQuest on the Background of the Novel

This WebQuest, covering topics such as dystopian literature, the American Fundamentalist movement, and feminism, can be useful as a student activity or a collection of teacher Web resources.