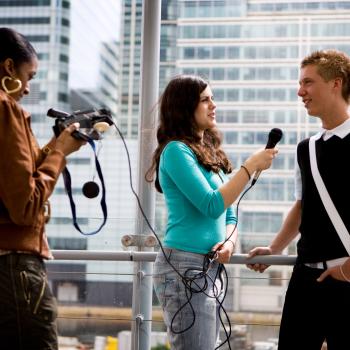 While reading, students closely examine the different characters in a novel by keeping journal entries, meeting for group discussions, and using an online graphic organizer. This extensive character examination helps them prepare for a final project that involves creating an interview-style television show in which students write the script and assume the roles of the television host and the characters on the show. Questions can be about events from the novel as well as other topics that were not explicitly covered in the novel. Answers are based on students' knowledge of the characters and their personalities.

Interactive Story Map: Students get a better look at the characters they’re dealing with when they plot out descriptive details in the Character Map.

The characters within us: Readers connect with characters to create meaning and understanding (Van Horn)

Remind students that each group will represents a different character in the novel. While reading, students need to pay close attention to the character that they have been assigned and meet at least three times to discuss their character as a group.

Grades
7 - 12
|
Calendar Activity
|
Author & Text
A Christmas Carol was the first book transmitted over radio!
Students write a script for A Christmas Carol on a level that primary students can read and perform. Older students record the performance and create a website to showcase photographs.
Grades
3 - 12
|
Calendar Activity
|
Literacy-Related Event
Celebrate Children's Authors and Illustrators Week
Students "step into the shoes" of their favorite author by reading several of their books, conducting research, and preparing displays and presentations for the class.
Grades
3 - 12
|
Calendar Activity
|
Historical Figure & Event
CNN debuted as the first television news network in 1980.
Students brainstorm a list of modern news sources and from previous centuries. Groups then research one of these sources and create a timeline showing the evolution of news.
Grades
3 - 12
|
Calendar Activity
|
Author & Text
Black Beauty author Anna Sewell was born in 1820.
Through Sewell's novel, students explore the cruelty to animals and extend the discussion to current events, eventually presenting the information.
Grades
3 - 8
|
Calendar Activity
|
Literacy-Related Event
Paperback books were first introduced in 1935.
Independent reading is promoted among students by organizing a paperback book swap in the classroom or with other classes at the same grade level.
Grades
K - 12
|
Student Interactive
|
Organizing & Summarizing
Story Map