Renaissance Humanism in Hamlet and The Birth of Venus 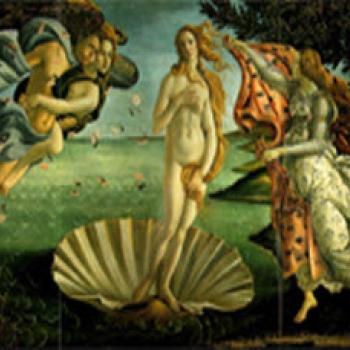 In the introduction of his Reading in the Dark, John Golden states, "Kids tend to be visually oriented, able to point out every significant image in a three-minute MTV music video, but when it comes to doing the same with a written text, they stare at it as if they are reading German." Golden goes on to state "the skills they use to decode the visual image are the same skills they use for a written text" (xiii). Golden's book outlines how to use film to help students practice their skills so they can then be transferred to written texts. The following lesson is based on the same principle but uses a work of art instead of a film to help students reinforce the same skills that are used to analyze a work of literature.

As an alternate assessment, you can ask students to write a letter from Shakespeare to Botticelli (or vice versa) complimenting him on how their two works are similar.

Grades
9 - 12
|
Professional Library
|
Book
Reading in the Dark: Using Film as a Tool in the English Classroom
In this practical guide, John Golden makes direct links between film and literary study by addressing reading strategies (e.g., predicting, responding, questioning) and key aspects of textual analysis.
Grades
9 - 12
|
Lesson Plan
|
Standard Lesson
Locating Purpose in Allusion through Art and Poetry
Through this lesson, students will learn how to use the literary term "allusion" in discussing how and why authors and artists draw on and transform subject material.