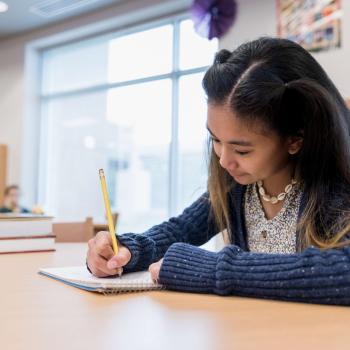 In "Spelling: From Invention to Strategies," Howard Miller begins a lesson on "constructed" spelling by surveying his middle school students, using Goodman, Watson, and Burke's question from Reading Miscue Inventory (1987): "When you are working on a writing assignment and you want to write a word you don't know how to spell, what do you do?"

Here, students are prompted by that question to become more explicitly aware of, and to articulate, the strategies they use while responding in writing to short story previously read by the class. The goal is to encourage (nearly) uninterrupted drafting, while allowing students to slow down briefly to consider the spelling of difficult words, which should become the routine when writing in and out of class. During the post-writing phase, students confer in small groups to share spelling strategies they used after drafting and then refer to standard spelling resources.

Alphabet Organizer: Students use this online tool to organize lists of words alphabetically, create pages for alphabet books, and more.

Spelling: From Invention to Strategies (Miller)

When students "construct" spelling using sound, sight recall, and analyzing strategies, among others, instead of memorizing lists of words, they produce more accurate (i.e., standard) spelling and increase their retention. In "Spelling: From Invention to Strategies," Howard Miller describes what happened when he asked students to list three things they might do when they want to write a word they can't spell. Over half the students listed "sounding it out" as their main strategy with most of the rest listing "looking it up," and "asking someone" as their main strategies. (Miller, 2002)

This lesson invites students to increase their self-awareness of the strategies they successfully use when they encounter a word they don't know how to spell-without breaking their stride as they draft a piece of writing.

Read a short story. (Students will write in response to a short story they have chosen from either an anthology or the class library. If the teacher chooses a story for the entire class, take the previous day's class period to either read it aloud or with partners. Otherwise, use that time for independent reading or assign the story for homework.)

Note: Prewriting and writing activities such as these should become routine classroom practice.