Storyboarding the Transformation from Dr. Jekyll into Mr. Hyde 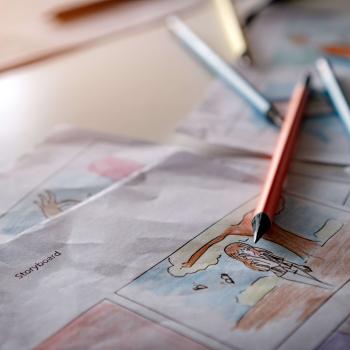 In Reading in the Dark: Using Film as a Tool in the English Classroom, John Golden suggests:

…film and literature are not enemies; in fact, they should be used closely together because they share so many common elements and strategies to gain and keep the audience’s attention. We know that for many of our students, film is much more readily accessible than print because of the visual nature and immediacy of the medium, but the very things that films do for us, good and active readers of literature have to do for themselves. (36)

By having students imagine how they would film a scene and then asking them to analyze how professional filmmakers have produced the same scene, we can draw on students knowledge of the “visual nature and immediacy of the medium” as well as engage them as active readers of the printed and visual text.

The internet movie database is an online database of movies and made for TV movies. It is a good place to start looking for adaptations of Dr. Jekyll and Mr. Hyde. While it is a good resources for finding and reading about adaptations, you cannot stream movies from IMDB.

Netflix is a movie rental and streaming service that requires membership and costs a monthly fee. If you are already a customer, it is a good resource for streaming clips of transformation scenes without having to have the physical DVDs.

Assessment ideas for each session are suggested in the last step of each session. They are:

The Stapleless Book can be used for taking notes while reading, making picture books, collecting facts, or creating vocabulary booklets . . . the possibilities are endless!