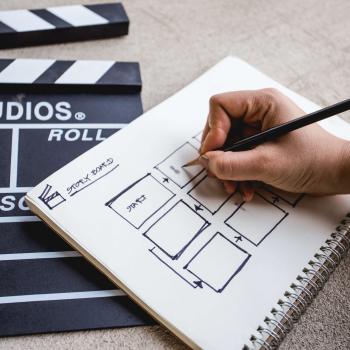 While students read a novel, they imagine the characters, setting, and action taking place.  This lesson allows students to use their imaginations in the form of a storyboard.  Students first read a book that has a complementary film adaptation.  They then learn about adaptation by writing short paragraphs and adapting them for film using storyboards. Once they have evaluated the adaptations, the students will create their visions of the books and compare them to the film.

Students often find the visual nature of film more accessible than works in print. When film and literature are used together in the classroom, students can transfer techniques from active viewing (which often comes more naturally) to their experience with reading literature. This transfer can enhance their skills as active readers and enable them to respond to a variety of media with more depth.

This website contains a vast collection of teachers’ guides and other educational materials.  The Learn section of the site offers 30 in-depth guides to classics as well as comprehensive author guides.

Film in the Classroom: A Guide for Teachers

This link connects you to a PDF version of a PBS Teaching Guide that is connected to 25 Masterpiece films and offers new ideas and innovative activities for teaching film in today’s digital environment.  This teacher’s guide also includes graphic organizers to help student’s evaluate classic films.

NOTE: Use other sessions, as necessary, to finish watching the film in its entirety before beginning Session Four.

Grades
9 - 12
|
Professional Library
|
Book
Reading in the Dark: Using Film as a Tool in the English Classroom
In this practical guide, John Golden makes direct links between film and literary study by addressing reading strategies (e.g., predicting, responding, questioning) and key aspects of textual analysis.
Grades
K - 8
|
Professional Library
|
Journal
Let's Go to the Movies: Rethinking the Role of Film in the Elementary Classroom
Argues that elementary language-arts teachers should expand their definition of "text" to include film, a valuable instructional material. Notes that today's elementary students come to class with a great deal of knowledge about films--prior experiences which teachers can tap into. Discusses the application to film of reader-response theories.
Grades
10 - 12
|
Lesson Plan
|
Standard Lesson
Life is Beautiful: Teaching the Holocaust through Film with Complementary Texts
After students have read a book about the Holocaust, such as The Diary of Anne Frank or Night by Elie Wiesel, students will view Life is Beautiful and complete discussion questions to challenge their ability to analyze literature using film.
Grades
9 - 12
|
Lesson Plan
|
Standard Lesson
Comparing a Literary Work to Its Film Interpretation
Students will really get into the swing of things as they analyze the text and film versions of Edgar Allan Poe's story, "The Pit and the Pendulum."
Grades
6 - 8
|
Lesson Plan
|
Unit
3-2-1 Vocabulary: Learning Filmmaking Vocabulary by Making Films
Bring the vocabulary of film to life through the processes of filmmaking. Students learn terminology and techniques simultaneously as they plan, film, and edit a short video.
Grades
6 - 8
|
Lesson Plan
|
Standard Lesson
Literature Circle Roles Reframed: Reading as a Film Crew
Capture students' enthusiasm for film and transfer it to reading and literature by substituting film production roles for the traditional literature circle roles.
Grades
3 - 5
|
Lesson Plan
|
Standard Lesson
Writing a Movie: Summarizing and Rereading a Film Script
Lights! Camera! Action! In this lesson, students view a scene with no dialogue from E.T., write a script for that scene, and perform a dramatic reading while the scene plays.
Grades
9 - 12
|
Lesson Plan
|
Standard Lesson
There Are No Small Parts: Minor Characters in David Copperfield
This lesson capitalizes on students' interest in social networking by asking students to build an online profile for a minor character in Charles Dickens' David Copperfield.
Grades
9 - 12
|
Lesson Plan
|
Standard Lesson
Storyboarding the Transformation from Dr. Jekyll into Mr. Hyde
Students imagine and storyboard their own vision of the transformation of Dr. Jekyll into Mr. Hyde and then evaluate movie portrayals.
Grades
3 - 5
|
Lesson Plan
Get the Reel Scoop: Comparing Books to Movies
Students compare a book to its film adaptation, and then perform readers theater of a scene from the book that they feel was not well represented in the movie version.
Grades
K - 12
|
Student Interactive
|
Organizing & Summarizing
Venn Diagram

Grades
3 - 12
|
Calendar Activity
|
Literacy-Related Event
Celebrate Children's Authors and Illustrators Week
Students "step into the shoes" of their favorite author by reading several of their books, conducting research, and preparing displays and presentations for the class.