Using Writing and Role-Play to Engage the Reluctant Writer 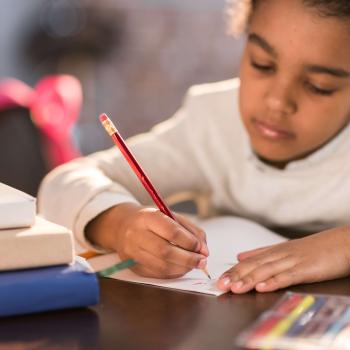 Writing in role allows students to understand the importance of characterization when writing stories. In this lesson, students explore the different characters in the story The Three Little Javelinas and then select one of the characters to write a letter to the author in role. Before students begin writing, they read the story as a whole class and complete character maps and story maps to analyze the characters and events in the story. Students will then use what they have learned about the character to write from the perspective of one of those characters. By creating their own context, students are able to hone their creativity and move forward on the writing process continuum.

Discuss with students the importance of the characters in stories and why authors pay particular attention in developing the characters. Engage students in a brainstorming session by asking them to write down the names of their favorite characters from the stories they have read. After brainstorming, ask students what makes the characters on their list interesting, likable, funny, sad, or mean? While engaging in this whole-group discussion, have students take notes in their writing journals about the different characters and their characteristics.

Have students pick two of their favorite characters and use the interactive Venn diagram to compare and contrast the characters' similarities and differences. After they have completed their Venn diagrams, gather students in pairs or small groups to share their findings.

Distribute The Writing Process handout to the class. Review the writing process with students by discussing, giving an example, and highlighting the importance of each step.

Have each student select a favorite character (from a story previously read in class) and create a Character Trading Card about that character. This can serve as a writing prompt for students to write a paragraph describing the character using the writing process as a guide. Students should share their trading cards and paragraph with a partner and critique each other's work. This writing activity allows students to practice using descriptive vocabulary to describe a character.

For the remainder of the session, introduce the concept of writing in role by demonstrating an example for students. Pick one of your favorite characters (e.g., the big bad wolf, one of the three little pigs) and explain to students that role-play is a dramatic activity that allows us to pretend like we are a character from a story.

After demonstrating a mini role-play, tell students that they will be learning how to write from the perspective of a character. Explain that they will have to think creatively about what the character would say if he or she were writing a letter, for example. Ask students to think about what the big bad wolf would say if he were writing a letter to the three little pigs. Would he be mean? Would he threaten them? Would he try to be friendly to trick them? Continue the demonstration by pretending like you are the big bad wolf writing a letter to the three pigs.

Read the story The Three Little Javelinas. Stop the reading periodically to point out the personality traits of the characters in the story. Ask students various questions, such as, is the big bad wolf in this story smart? Is he mean? Is he funny? What about the javelinas? Which one is smart? Why? Which one is carefree? What in the story makes you think that?

Review the lesson from Session 2 briefly and distribute one copy of the Character Map graphic organizer to each student. Encourage each student to select one character from the story The Three Little Javelinas and fill out the character map. Have students identify the characters that they selected in the pentagon at the top of the sheet. Then fill in three character traits in the ovals and supporting details from the story in the rectangles. Near the end of the session, have students meet in their writing circles to discuss their character maps.

At the beginning of this session, briefly review the story The Three Little Javelinas. Have students review their notes and character maps as a whole class and again within their writing circles.

Take students to the computer lab or media center for the remainder of the class period to complete an interactive Story Map. Students will need to map the character that they selected in Session 3, as well as the setting, conflict, and resolution. Remind students to print their story maps and then staple them into their writing journals to use as a reference.

In their writing journals, have students write letters to the author of The Three Javelinas from the perspective of one of the characters in the story. Once again, explain that when writing in role, students are to pretend that they are the character in the story. This writing/drama activity should be tied to the 6 steps of the writing process, whereby a final copy should be expected at the end of Session 6.

Have students peer edit their partner's work, and then rewrite the final version of their letters using the interactive Letter Generator.

Have a "writing in role festival" where students are invited to share their written letters. Encourage students to visually act out or role-play their letters to the author, using verbal expressions (a different voice or accent), costumes, and props.

This tool provides a fun and useful way to explore a variety of topics such as a character in a book, a person or place from history, or even a physical object. An excellent tool to for summarizing or as a prewriting exercise for original stories.