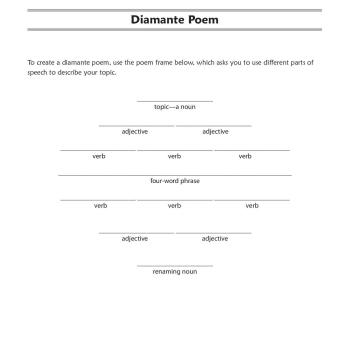 This tool will allow your students to create a diamante poem by reflecting on their knowledge of a topic and by using nouns, verbs, and adjectives in a creative manner.

Poetry can be integrated into a variety of subject areas. Students in grades 3–8 often write many different kinds of poetry but may be unfamiliar with a diamante poem. Before distributing this tool, be sure to model a diamante poem ahead of time.  Once students understand the format, they can use a diamante poem to describe any number of curriculum topics.

This online tool enables students to learn about and write diamante poems.