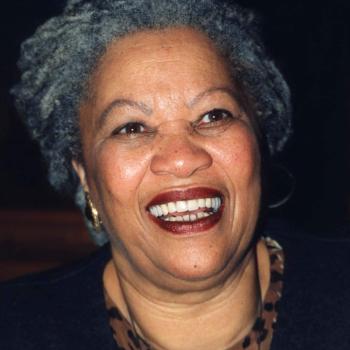 Toni Morrison, Nobel Laureate and Pulitzer Prize-winning author of fiction, nonfiction, drama, and poetry, was born in 1931 in Lorain, Ohio. Best known for her novels such as The Bluest Eye, Song of Solomon, and Beloved, she also published children's books based on Aesop's fables with her son Slade. Recurring motifs in her works for both young and adult readers included the reworking of myths, fables, and folk tales and the importance of personal and collective memory. She passed away in 2019.

Although most of Morrison's works are appropriate at the secondary level, students at any grade can be introduced to her style and language through her book Who's Got Game? Poppy or the Snake?, based on Aesop's fable "The Farmer and the Snake."

The society, an official member of the Coalition of American Author Societies that make up the American Literature Association, has as its goal to "initiate, sponsor, and encourage critical dialogue, scholarly publications, conferences and projects devoted to the study of the life and works of Toni Morrison."

The Nobel Prize in Literature 1993

In 1993, the Nobel Foundation awarded its prize in Literature to Morrison, "who in novels characterized by visionary force and poetic import, gives life to an essential aspect of American reality." The site contains a biography, the text and sound recording of her Nobel lecture, and excerpts from her prose.

Toni Morrison: A Mother, A Stranger, "A Mercy"

In this special edition of the Book Tour program on National Public Radio, Toni Morrison reads from her 2008 novel, A Mercy. The page also includes an interview with Morrison.

Fiction of Toni Morrison, The: Reading and Writing on Race, Culture, and Identi…

A collection of essays offering new and experienced teacher-scholars alternative ways to approach Toni Morrison's fiction and prose in the classroom, focusing on the history of racism and identity and cultural politics.