The 19th Amendment to the U.S. Constitution gave women the right to vote in 1920. 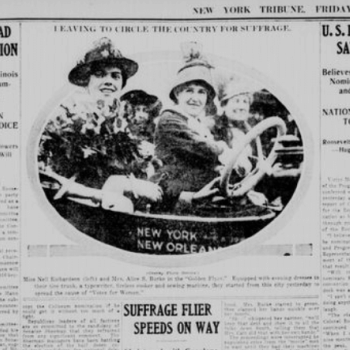 Proposed on June 4, 1919, it took more than a year for the 48 states to ratify the 19th Amendment, which became law when the Secretary of State announced the completion of the ratification process on August 26, 1920, officially giving women in the U.S. the right to vote.

Six months before the 19th Amendment established women's right to vote in the United States, the League of Women Voters was founded to help women become responsible voters. Today, the League of Women Voters works toward helping American citizens be active, involved participants in the political system—from voting to campaigning to taking a position on current issues.

Invite a representative from the local chapter of the League to talk to your students about voting rights and what they can do to be active in politics, even if they are not old enough to vote yet. Use the ReadWriteThink lessons Vote For Me! Developing, Writing, and Evaluating Persuasive Speeches and Voting! What's It All About? to explore voting with younger students.

Compare voting rights in the United States to voting rights around the world. Students may be shocked to find that in some countries women are still not permitted to vote!

In addition to historical documents related to the passage and ratification of the 19th Amendment, this Library of Congress site includes texts, photos, political cartoons, and lesson plans.

Wayback: Stand Up For Your Rights

This PBS website on civil rights includes a special feature for kids on "Women and the Vote."

This website offers information about Women's Rights National Historical Park, which is located in Seneca Falls, the home of many important sites in the history of women's rights in the U.S.

Grades
9 - 12
|
Lesson Plan
|
Standard Lesson
From Friedan Forward—Considering a Feminist Perspective
Students write letters expressing personal views on issues like equal pay, equal education/employment opportunity, and gender rolesand receive these letters six years later.
Grades
3 - 5
|
Lesson Plan
|
Unit
Voting! What's It All About?
Students explore a variety of sources for information about voting. They evaluate the information to determine if it is fact or opinion, and then create a graffiti wall about voting.
Grades
4 - 5
|
Lesson Plan
|
Standard Lesson
Vote for Me! Developing, Writing, and Evaluating Persuasive Speeches
This lesson encourages students in grades 4 and 5 to think critically and write persuasively by focusing on preparing, presenting, and evaluating mock campaign speeches.
Grades
9 - 12
|
Lesson Plan
|
Unit
Analyzing Character Development in Three Short Stories About Women
Students read three short stories about women; discuss the development of female characters, gender differences, and society's expectations; and write scripts in which the characters discuss their similarities and differences.
Grades
3 - 12
|
Calendar Activity
|
Holiday & School Celebration
March is National Women's History Month.
A scrapbook highlighting the accomplishments of famous American women is created as a class using the Alphabet Organizer and Bio-Cube.
Grades
6 - 12
|
Calendar Activity
|
Historical Figure & Event
Constitution Day is observed today in the U.S.
Students explore an annotated online version of the Constitution before sharing what they learned about one aspect of the document through the Trading Card interactive.