The Crystal Palace hosted the first display of life-size dinosaur replicas in 1854. 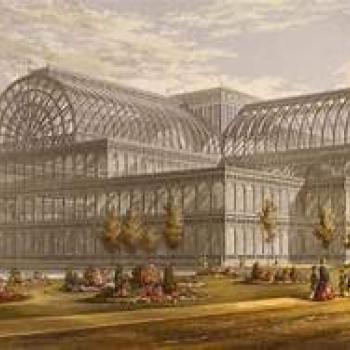 On a series of three artificial islands and in the surrounding ponds, visitors to the 1854 World's Fair at the Crystal Palace in London saw the first life-size replicas of dinosaurs such as the Iguanodon, the Megalosaurus, and Pterodactyls, all created by sculptor Benjamin Waterhouse Hawkins.

Waterhouse Hawkins' dinosaur replicas offer a great opportunity for an inquiry-based project. Some of Hawkins' models are known for their minor errors or incomplete detail. Consider the horn on the Iguanodon or the submerged Mosasaur (with body obscured since only fossils of the head had been discovered). The replicas are in fact more of a historical artifact than an accurate scientific model.

After learning about Hawkins' replicas, do a study of what we know about these same dinosaurs today-what did Hawkins get right and where did he draw the wrong conclusions? Students could work individually or in small groups to investigate a dinosaur of their choice, comparing Hawkins' versions to current knowledge about the prehistoric animals. The ReadWriteThink Venn Diagram is a nice tool to help students organize and present their findings.

The Best Dinosaur Books for Kids

This page from Smithsonian.com lists some dinosaur books appropriate for kids, along with brief descriptions.

Nyder's site includes photos of all the remaining dinosaurs in their original location on artificial islands outside the site of the original Crystal Palace building at Sydenham.

This Brooklyn College page details not only Hawkins' work on the Crystal Palace dinosaur replicas but also the ill-fated plans to build similar replicas in New York City.

Scientists out on a dig have found parts from six different dinosaurs. Put the parts together to create a dinosaur that really existed, OR create an imaginary dinosaur of your own!

Grades
K
|
Lesson Plan
|
Unit
Writing Reports in Kindergarten? Yes!
This lesson encourages young students to see themselves as writers with a message to convey. Three types of reports are provided to show what kindergartners and emergent writers can do.
Grades
6 - 8
|
Lesson Plan
|
Standard Lesson
Picture Books as Framing Texts: Research Paper Strategies for Struggling Writers
Students use picture books as framing texts for research, freeing them from the language of encyclopedia sources and allowing them to focus their attention on the content of their papers.
Grades
K - 2
|
Lesson Plan
|
Standard Lesson
Our Community: Creating ABC Books as Assessment
Students create alphabet books, which are used as an integrated assessment with science, health, social studies, and any other content area. This lesson plans looks at the theme of community.
Grades
K - 12
|
Student Interactive
|
Organizing & Summarizing
Venn Diagram