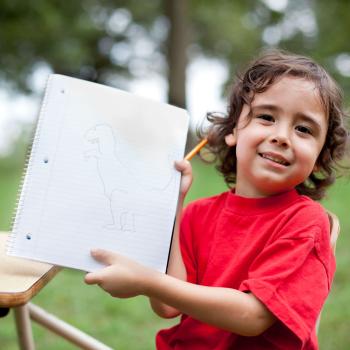 This lesson provides three types of reports that can be written and shared by kindergarten students. These reports allow young students to see themselves as writers with important information to share with others. In the first report, students report what they've learned about an apple using all five senses by completing a simple report form. In the second activity, they explore a variety of nonfiction media about animals of their choice. After they write journal pages recording simple information about the animals, completed pages are stapled together, and students create clay representations of their selected animals. In the final report, students use facts they have researched to create and share original riddles about selected animals.

Apple Report Form: Students fill in this simple form to create a report on apples.

In her book The Writing Workshop, Katie Wood Ray reflects on what it means to be a writer: "I think it comes down to the essential nature of writing. Writing is something that you do, not something that you know, and when you think about it, that is an incredibly important understanding for us to have as teachers of writing." (30)

Ralph Fletcher and JoAnn Portalupi, in the introduction to their book Writing Workshop, stress the importance of the following factors for our students to become effective writers:

This lessons gives three examples of reports that can be written by kindergarten students and other emergent readers and writers that will allow them to "do" writing and see themselves as writers with information to share with an interested audience.

Writing Workshop, The: Working through the Hard Parts (And They're All Hard Parts) (Ray)

Report 1: Documentation of a Science Exploration
Example: An Apple Report

Report 1: Documentation of a Science Exploration
Example: An Apple Report

Report 1: Documentation of a Science Exploration

Students should be taught to self-assess through the use of a rubric. The student and the teacher conference together to score the rubric.

Grades
7 - 12
|
Calendar Activity
|
Historical Figure & Event
The Crystal Palace hosted the first display of life-size dinosaur replicas in 1854.
After learning about Hawkins' dinosaur replicas, students work individually or in small groups to investigate a dinosaur of their choice, comparing their findings to Hawkins'.
Grades
3 - 8
|
Calendar Activity
|
Historical Figure & Event
John Chapman, better known as Johnny Appleseed, was born in 1775.
Students use the Timeline Tool to organize details about Chapman's life, the Venn Diagram to organize information, and the Shape Poems Interactive to create poems about apples or Johnny Appleseed.
Grades
3 - 6
|
Student Interactive
|
Inquiry & Analysis
Animal Inquiry
Supporting inquiry-based research projects, the Animal Inquiry interactive invites elementary students to explore animal facts and habitats using writing prompts to guide and record their findings.
Grades
K - 8
|
Professional Library
|
Book
The Writing Workshop: Working through the Hard Parts (And They're All Hard Parts)
A practical, comprehensive, and illuminating guide for both new and experienced teachers that confronts the challenges of the writing workshop head-on.
Grades
K - 2
|
Lesson Plan
|
Standard Lesson
Animal Study: From Fiction to Facts
Students listen to fiction and nonfiction read-alouds and explore selected Websites to identify factual information about animals. This lesson focuses on ants, but can be adapted to any animal.