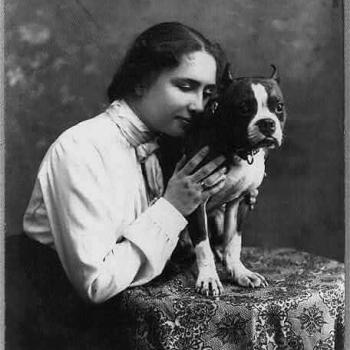 When she was born in Alabama on this day in 1880, Helen Keller was a normal baby; but when she was nineteen months old, she lost both her hearing and sight after an illness. As an adult, Keller was a writer, an educator, and a social activist.

In 1887, Keller learned to talk using a finger alphabet after her well-known breakthrough with Annie Sullivan at the family's well pump. The finger alphabet that Keller learned to communicate with Sullivan, her family, and eventually, many others was a basic version of the system that is now known as American Sign Language. Have your students explore the American Sign Language browser from Michigan State University and try using a few signs. Discuss how ASL differs from spoken English and how the two are similar. During the discussion, introduce the misconceptions about ASL addressed in the article Common Myths about Sign Language.

Ivy Green, Helen Keller's birthplace, sponsors this website on Keller's life and accomplishments as well as pictures and details on the birthplace, its grounds, and events that take place at Ivy Green.

Technology and Literacy in Deaf Education

The focus of this blog will be to synthesize research regarding the use of technology in the literacy development of deaf and hard of hearing students.

Helen Keller archive at the American Foundation for the Blind (AFB)

Grades
6 - 8
|
Lesson Plan
|
Standard Lesson
Heroes Around Us
Students select, read about, and report on a hero and then identify how their hero matches certain criteria and characteristics. Hero reports are then compiled into a class book.
Grades
9 - 12
|
Lesson Plan
|
Standard Lesson
Exploring Disability Using Multimedia and the B-D-A Reading Strategy
History takes on new dimensions in this interactive multimedia lesson that emphasizes the B-D-A approach to research as students investigate the experiences of people with disabilities since the early 1800s.
Grades
1 - 3
|
Lesson Plan
|
Standard Lesson
Using American Sign Language to Improve Comprehension and Vocabulary
American Sign Language is combined with the hilarious poetry and pictures of Sam's Sandwich, a lift-the-flap book, to engage all types of learners in acquiring key vocabulary.