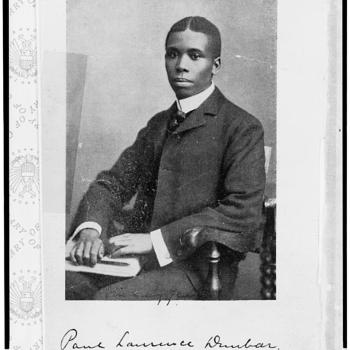 Best known for his poems “We Wear the Mask” and “Sympathy” (the poem from which Maya Angelou took the title of her memoir, I Know Why the Caged Bird Sings), Paul Laurence Dunbar wrote dialect poems, other poems, novels, short stories, and essays. Dunbar had served as class poet at his high school in Dayton, Ohio; he later worked as an elevator operator while he wrote in his spare time.

Project or share copies of Dunbar’s poem Sympathy. Read it aloud and ask students to discuss words, lines, and images that stand out to them as particularly meaningful.

Then share with students the critical excerpts on the poem from Modern American Poetry (including earlier and later versions of part of the poem). Ask small groups to read the excerpts and then discuss how the ideas from the three critics change or deepen their understanding of the poem.

Dunbar's entry on the Academy of American Poets website contains biographical information, a collection of poems, and personal correspondence between him and his wife, Alice Nelson-Dunbar.

The Poetry Foundation's collection of resources on Paul Laurence Dunbar includes a biography and several poems.

Grades
9 - 12
|
Lesson Plan
|
Unit
Behind the Masks: Exploring Culture Through Art and Poetry
Students research mask-making from various cultures, highlight the masks' connections to cultural practices, compose poetry to reveal their understanding, analyze their own culture, and create personal masks and poetry.
Grades
8 - 12
|
Lesson Plan
|
Standard Lesson
Responding to Tragedy: Then and Now
After reading several poets' personal responses to the September 11th terrorist attacks, students write a "then and now" poem that puts their early memories of the event in conversation with their current understanding of and response to the tragedy.
Grades
7 - 12
|
Calendar Activity
|
Author & Text
In 1928, Maya Angelou was born.
After hearing Maya Angelou's poem, "On the Pulse of Morning," students infer information about the speaker and her feelings about America and reflect on how one's life and experiences can influence one's writing.