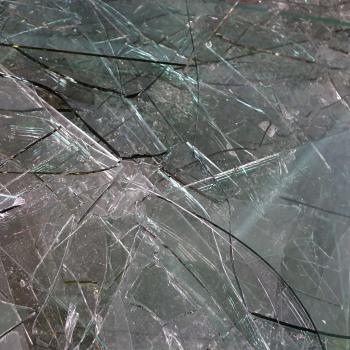 In 1938, as Hitler began to dominate the lives of the Jewish population of Germany, Nazi soldiers were ordered to destroy Jewish stores and homes on what became known as Kristallnacht, or the Night of Broken Glass.

Many of the lessons associated with a study of Kristallnacht and the Holocaust focus on the incredibly vicious treatment of the Jews at the hands of Hitler and the Nazis. It is difficult to get students to understand how it was possible for the leaders of Germany at the time to wreak havoc on a segment of the German citizenry without others coming to their aid or rescue. To facilitate students' understanding, a journal prompt asking them to recall a time when they failed to come to the assistance of someone who needed help could be used at the beginning of the class period. An alternative would be to read "The Good Samaritan" from Rene Saldana's story collection Finding Our Way, in which a young man wrestles with just this situation.

This resource discusses the events leading up to Kristallnacht. Links to books used as sources are included.

Photographs and other historical documents about Kristallnacht detail the horror and destruction of that night.

Destruction of Synagogues on Kristallnacht

This map, from the Florida Center for Educational Technology's A Teacher's Guide to the Holocaust, provides information about the more than 200 synagogues destroyed during Kristallnacht. Links to timelines and other pieces of information are also at this site.

Teaching about the Kristallnacht Pogrom

Here are some strategies and resources to guide you in teaching this topic from Echoes & Reflections.

Grades
6 - 8
|
Lesson Plan
|
Unit
Fighting Injustice by Studying Lessons of the Past
Social injustice occurs every day all over the world. In this lesson, students research a few historical examples of social injustice, including the Holocaust, the Trail of Tears, and Japanese internment.
Grades
6 - 8
|
Lesson Plan
|
Unit
Investigating the Holocaust: A Collaborative Inquiry Project
Students explore a variety of resources as they learn about the Holocaust. Working collaboratively, they investigate the materials, prepare oral responses, and produce a topic-based newspaper to complete their research.
Grades
6 - 8
|
Lesson Plan
|
Standard Lesson
Dynamic Duo Text Talks: Examining the Content of Internet Sites
An Observation and Inquiry Sheet guides students as they analyze and compare their reactions to the value, engagement, and credibility of three websites related to Anne Frank and the Holocaust.
Grades
9 - 12
|
Lesson Plan
|
Unit
Using Student-Centered Comprehension Strategies with Elie Wiesel's Night
Working in small groups, students read and discuss Elie Wiesel's memoir Night and then take turns assuming the "teacher" role, as the class works with four different comprehension strategies.
Grades
10 - 12
|
Lesson Plan
|
Standard Lesson
Life is Beautiful: Teaching the Holocaust through Film with Complementary Texts
After students have read a book about the Holocaust, such as The Diary of Anne Frank or Night by Elie Wiesel, students will view Life is Beautiful and complete discussion questions to challenge their ability to analyze literature using film.
Grades
6 - 9
|
Lesson Plan
|
Standard Lesson
Writing for Audience: The Revision Process in The Diary of Anne Frank
After reading or viewing The Diary of Anne Frank, students will make connections between audience and purpose and revise a journal entry with an outside audience in mind.
Grades
7 - 12
|
Calendar Activity
|
Author & Text
Elie Wiesel was born on September 30, 1928.
Students compare and contrast two views of the Holocaust from different authors. Students may also research stories of other survivors who may or may not be published and create a presentation on this survivor.
Grades
5 - 12
|
Calendar Activity
|
Historical Figure & Event
Anne Frank received her famous diary in 1942.
Students learn about eyewitness reports through a lesson that is grade-level appropriate. Then, groups use primary source documents and research an event using eyewitness accounts.