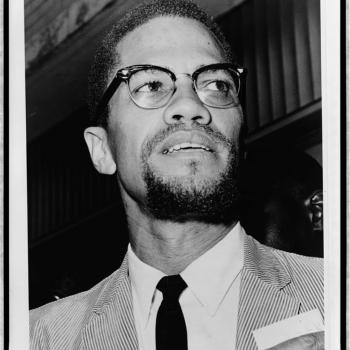 Named Malcolm Little by his parents in 1925, Malcolm X became one of the most prominent militant black nationalist leaders in the United States. He was a spokesperson for the Nation of Islam and founder of both the Muslim Mosque, Inc., and the Organization of Afro-American Unity. Malcolm X was assassinated in 1965.

What do names tell us about people? Ask students to write about the origin of their own names in their journals. How did they come to be named? Who made the decision about their official names? What nicknames do they have? What names do they like or dislike and why? If they could pick out their own names, what would they select?

After students have had time to reflect and write on this topic, explore the names Malcolm X used during his lifetime: Malcolm Little, Detroit Red, Malcolm X, el-Hajj Malik el-Shabazz, and Omowale. Students may have an easier time understanding Malcolm X's switches if they consider Esperanza's desire to change her name in Sandra Cisneros's House on Mango Street. Share this excerpt with students, and then hold a class discussion about the different names Malcolm X used during his life. Next to each name, ask the class to brainstorm adjectives that might be used to describe Malcolm X during that period in his life.

Links at this site provide resources about Malcolm X and his life. Included are an audio archive of his speeches, photographs, a timeline, links to related Internet resources, and more.

This site from Columbia University includes new research and multimedia materials about Malcolm X. Research for an upcoming biography about Malcolm X is included in the site, as well as numerous digital interviews with people who knew him.

This Encyclopaedia Britannica entry on Malcolm X includes biographical information, as well as suggestions for further reading and links to other people and places related to black history.

Malcolm Knew He Was a Marked Man

This historical article, from the New York Times Learning Network, discusses an interview with Malcolm X, given the week before he was killed by assassins identified as Black Muslims.

Grades
6 - 8
|
Lesson Plan
|
Standard Lesson
Breaking Barriers, Building Bridges: Critical Discussion of Social Issues
Through a series of picture book read-alouds, students engage in critical discussion of complex issues of race, class, and gender.
Grades
9 - 12
|
Lesson Plan
|
Standard Lesson
Naming in a Digital World: Creating a Safe Persona on the Internet
Students explore naming conventions in digital and non-digital settings then choose and explain specific names and profiles to represent themselves online.
Grades
K - 2
|
Lesson Plan
|
Recurring Lesson
Student of the Day: Create Sound/Letter Understanding With Names
Name games make learning letters fun and interactive in this lesson where students get to know more about each other as they spell out their classmates' names.
Grades
4 - 7
|
Lesson Plan
|
Standard Lesson
Boars and Baseball: Making Connections
In this lesson, students will make text-to-self, text-to-text, and text-to-world connections after reading In the Year of the Boar and Jackie Robinson. After sharing and discussing connections, students choose and plan a project that makes a personal connection to the text.
Grades
5 - 9
|
Lesson Plan
|
Standard Lesson
Exploring Perspectives on Desegregation Using Brown Girl Dreaming
Students read and discuss a selection of poems from Jacqueline Woodson's Brown Girl Dreaming to explore varying views on the process of desegregation in America.
Grades
K - 12
|
Calendar Activity
|
Literacy-Related Event
Take part in the African American Read-In!
Students come together with family and friends to take part in a read-in of books by African American authors and report their results.