Novelist Ernest Hemingway was born on this day in 1899. 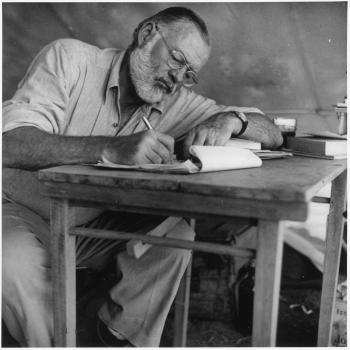 At 17, Ernest Hemingway began his literary career as a newspaper writer. In 1926, his first major work, The Sun Also Rises, was published. This novel, as well as A Farewell to Arms and For Whom the Bell Tolls, were based on his experiences in World War I and the Spanish Civil War. Considered to be one of his best works, The Old Man and the Sea was published in 1952, two years before he was awarded the Nobel Prize in Literature.

Have your students examine the ways different authors treat the subject of war in their writing.

You may wish to use this activity as a term project and have students use their research to write comparative essays on the two chosen novels. Have them use the Compare & Contrast Map to plan their work.

PBS offers this collection of Hemingway resources. There are virtual tours, images, and information about key locations in his life, including Spain, Africa, Key West, Cuba, and more.

The Nobel Prize in Literature 1954

This page features information about Hemingway's Nobel Prize. Included are links to a biography, his presentation speech with an audio clip, a critical article, and other information.

The website of the Ernest Hemingway Foundation includes a variety of resources on the author.

Picturing Hemingway: A Writer in His Time

The National Portrait Gallery offers this exhibition of images and information from Hemingway's life. The site includes sections on Hemingway's beginnings in Paris, as well as the middle and final years of his literary career.