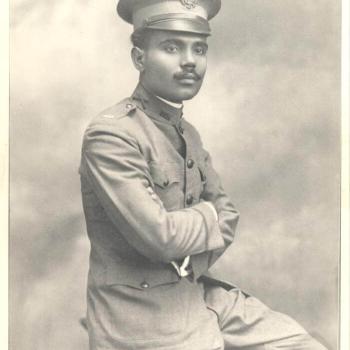 Prominent political and social activist was born in Ponce, Puerto Rico on June 29, 1893 or September 12, 1891.  After being educated at the University of Vermont and Harvard University and serving in the US military in World War 1, Albizu Campos became interested in the Puerto Rican independence movement, serving as the president of the Nationalist Party from 1930 until his death in 1965.

Among his accomplishments are improved labor conditions in Puerto Rico (Albizu Campos led strikes against the Puerto Rico Railway and Light and Power Company and the US sugar industry) and bringing attention to the problematic colonial relationship between the US and Puerto Rico.  His theory of non-collaboration with colonial structures (such as boycotting elections and military service) made him a controversial figure in the US.  He was jailed twice and was under FBI surveillance for much of his life.

Called “El Maestro” or “The Teacher” for his powerful speaking ability, Albizu Campos is the namesake of several schools in Puerto Rico, Harlem, and Chicago.

Let students or groups of students choose a figure from this list, or another nationalist figure of their choice.  Students can conduct research through print and Internet sources and share their findings with their peers using the Bio-Cube student interactive.

This biography provides additional information about the life and accomplishments of Pedro Albizu Campos.

This entry from Stanford University provides background information on nationalism, including links to other resources.

Grades
6 - 8
|
Lesson Plan
|
Standard Lesson
Heroes Around Us
Students select, read about, and report on a hero and then identify how their hero matches certain criteria and characteristics. Hero reports are then compiled into a class book.
Grades
6 - 8
|
Lesson Plan
|
Unit
Biography Project: Research and Class Presentation
Classroom biography study offers high-interest reading with a purpose, as students begin with inquiry and research, summarize and organize their information, and prepare oral presentations to share with the class.
Grades
6 - 8
|
Lesson Plan
|
Unit
Crit Lit for Kids: From Critical Consciousness to Service Learning
Students take their ideas from the classroom page to the community pavement when they participate in a service-learning project based on their multimedia presentations.