The Pied Piper led the children out of Hamelin in 1376. 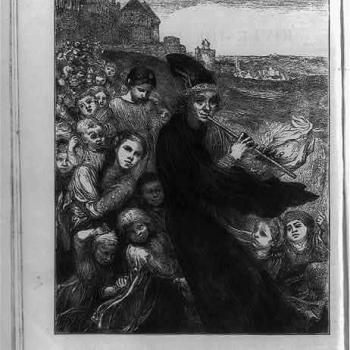 The legend of the Pied Piper of Hamelin has been recounted in a number of literary works by authors including the Brothers Grimm and poet Robert Browning. Though legend says that the Pied Piper led the children out of Hamelin on June 26, 1284, Browning used the date July 22, 1376, for rhyming purposes.

Have you ever wondered what things would look like in Hamelin from the rats' point of view? Read aloud The Amazing Maurice and His Educated Rodents by Terry Pratchett, winner of the 2001 Carnegie Medal. The synopsis of the book included in this resource guide shows why librarians in the United Kingdom named this book the "outstanding book for children and young people" published in 2001.

After sharing this book with students, have them compare Pratchett's version with Browning's version. After discussing how perspective changes the story, you can have students look at other fairy tale retellings such as Jon Scieszka's The True Story of the Three Little Pigs.

The Pied Piper of Hamelin

The Indiana University Libraries site includes an electronic version of the 1888 edition of Browning's poem with scanned images of the illustrations by Kate Greenaway.

For background information on Browning, visit the Academy of American Poets site. This site also features some of his poems, including "The Pied Piper of Hamelin."

The Pied Piper of Hamelin and Related Tales from Other Towns

This page from the University of Pittsburgh offers several versions of the Pied Piper tale, including the Brothers Grimm version and Browning's version.

Grades
3 - 5
|
Lesson Plan
|
Standard Lesson
Teaching Point of View With Two Bad Ants
Students will be crawling all over this assignment when they use illustrations and text to learn about life from a bug's point of view.
Grades
3 - 5
|
Lesson Plan
|
Standard Lesson
Exploring World Cultures Through Folk Tales
Journey around the world with students as they read a Japanese, African, or Welsh folk tale, create a visual depiction of the tale, research the tale's culture, and present findings.
Grades
6 - 8
|
Lesson Plan
|
Standard Lesson
The Big Bad Wolf: Analyzing Point of View in Texts
Was the Big Bad Wolf really all that bad? This lesson encourages students to analyze multiple viewpoints, view texts from different angles, and recognize gaps in narrative.
Grades
6 - 8
|
Lesson Plan
|
Standard Lesson
Book Report Alternative: A Character's Letter to the Editor
Students write a persuasive letter to the editor of a newspaper from a selected fictional character's perspective, focusing on a specific issue or situation explored in the novel.
Grades
K - 2
|
Lesson Plan
|
Standard Lesson
Cowboys and Castles: Interacting With Fractured Texas Tales
What do cowboy hats have to do with fairy tales? Two traditional fairy tales and their Texas-based counterparts set the stage for five different ways to respond to text.
Grades
3 - 5
|
Lesson Plan
|
Standard Lesson
This is My Story: Encouraging Students to Use a Unique Voice
What did the wolf think of Red Riding Hood? Once Upon a Fairy Tale offers his side of the story and more, providing vivid examples of how voice enlivens narrative. After comparing versions of the story, students apply the concept of voice to Fractured Fairy Tales and other writing activities.
Grades
K - 2
|
Lesson Plan
|
Unit
Comparing Fiction and Nonfiction with "Little Red Riding Hood Text" Sets
Students discuss and compare differing versions of "Little Red Riding Hood" and other tales about wolves in cumulative read-aloud sessions and text set explorations.
Grades
K - 8
|
Calendar Activity
|
Author & Text
Jon Scieszka was born in 1954.
Students review Scieszka's tips for encouraging young people to read and then create their own, sharing ideas with adults in their community through a letter.