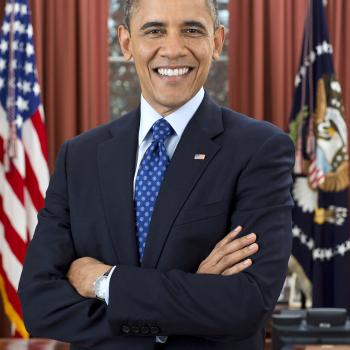 Americans made history in 2008 by electing Barack Obama as the nation's first African-American President. In addition to his work as a community organizer and Senator, Obama also wrote two books, Dreams from My Father and The Audacity of Hope, before being elected President of the United States.

In his memoir Dreams from My Father, Obama describes an incident in which he, as a young boy, "came across the picture in Life magazine of the black man who had tried to peel off his skin" (51). Seeing the devastating effect negative messages about being African-American had on this man, Obama "began to notice that [Bill] Cosby never got the girl on I Spy, that the black man on Mission Impossible spent all his time underground. [He] noticed that there was nobody like [him] in the Sears, Roebuck Christmas catalog ... and that Santa was a white man" (52).

Share this passage expressing Obama's experiences with media messages and his understanding of his identity. Then encourage students to engage in an examination of the ways they are portrayed in the media. Point them toward print, online, and television portrayals of people who share their age bracket, race, gender, and any other relevant aspects of their identity.

Adapt activities from the lesson plans below to supplement their research and organize their findings.

Information and resources from the National Association for Media Literacy Education.

These resources promote media literacy education as a framework for accessing, analyzing, evaluating, creating, and participating with media content. Visitors will find readings, lesson plans, and samples of student-produced media.

A Different World: Children's Perceptions of Race and Class in Media

This online article presents a summary of recommendations from a study that links young people's understanding of their identity to ways they are portrayed in the media. Included is a link to the full research report.

Nationally recognized as a leader in media literacy education, the Media Literacy Project provides resources that promote critical thinking and activism to build healthy and just communities. In addition to teaching and learning resources, visitors will also find information about media-based contests for students.

This resolution discusses that understanding the new media and using them constructively and creatively actually requires developing a new form of literacy and new critical abilities "in reading, listening, viewing, and thinking."