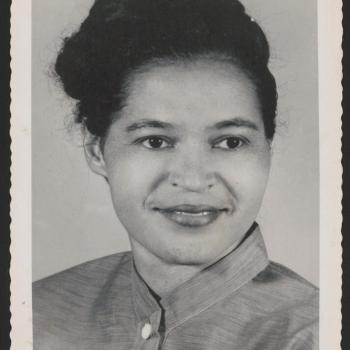 Rosa Parks (1913–2005) is best known for her refusal to give up her seat to a white man on a crowded bus in Montgomery, Alabama, on December 1, 1955. Her arrest sparked the Montgomery Bus Boycott, a pivotal event in the civil rights movement that ultimately led to the dismantling of Jim Crow segregation. Rosa Parks became an icon of the movement, celebrated for this single courageous act of civil disobedience, but she is often characterized by misconceptions. Contrary to popular belief, Parks was not a demure seamstress who chose not to stand because she was physically tired. Her calm demeanor hid a militant spirit forged over decades. Learn more about her and her life by exploring these primary sources.

Explore the sites and online exhibitions listed below. Ask students what they can learn from these primary sources about why Rosa Parks took her stand against segregation, and about the organizations and movements that participated in the struggle. They might compare that to what they learn from a textbook or other secondary source and then write a possible update for the secondary source.

It's important that students understand the difference between primary and secondary sources. Visit here for a solid definition and see some examples.

Rosa Parks in Her Own Words

Rosa Parks: In Her Own Words showcases rarely seen materials that offer an intimate view of Rosa Parks and documents her life and activism—creating a rich opportunity for viewers to discover new dimensions to their understanding of this seminal figure.

This gallery showcases a selection of items from the Rosa Parks Papers at the Library of Congress, a gift from the Howard G. Buffett Foundation. This collection contains thousands of items that document the life, work, and legacy of this civil-rights legend.

In honor of the birthday of civil rights legend Rosa Parks, this blog highlights the many cards and letters students wrote for Ms. Parks over the years.

Inside the Rosa Parks Collection

Grades
5 - 12
|
Calendar Activity
|
Historical Figure & Event
Rosa Parks was arrested for refusing to give up her seat on a bus.
Students make believe that the year is 1955 and they just heard about Parks' arrest. Students write newspaper editorials with their points of view on segregation.
Grades
6 - 8
|
Lesson Plan
|
Standard Lesson
Childhood Remembrances: Life and Art Intersect in Nikki Giovanni's "Nikki-Rosa"
Students explore what Carol Jago calls the place "where life and art intersect" by reading Nikki Giovanni's poem, "Nikki-Rosa," and then writing about childhood memories of their own.
Grades
11 - 12
|
Lesson Plan
|
Standard Lesson
Examining the Legacy of the American Civil Rights Era