Rosa Parks was arrested for refusing to give up her seat on a bus. 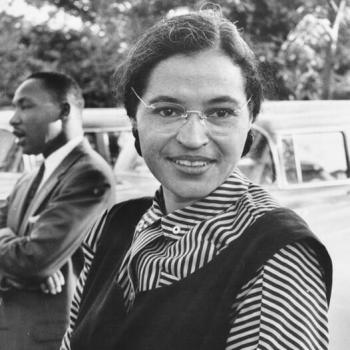 On her bus ride home from work on December 1, 1955, Rosa Parks sat in the first row of the "colored section." The bus was crowded, and when asked to give up her seat for a white person, she refused and was arrested.

Rosa Parks clearly broke the law when she refused to give up her seat on the bus for a white person. As educators, we teach citizenship to students. Laws are made to benefit society and should be followed by all. In the case of Parks, your students will likely agree that the law was unjust and her actions were justified.

Ask your students to make believe that the year is 1955 and they just heard about the arrest of Parks. Invite them to write newspaper editorials explaining their points of view about the current segregation laws in Montgomery, Alabama.

Rosa Parks: How I Fought for Civil Rights

Students can visit the Scholastic website to find interesting and easy-to-read information about Rosa Parks, including an interview with her.

Read an interview with Rosa Parks courtesy of the Academy of Achievement.

Tolerance.org offers educators a free curriculum kit for the classroom that revisits this familiar historical event. The kit includes a teaching guide, with classroom activities tied to the story of Rosa Parks.

Grades
6 - 8
|
Lesson Plan
|
Standard Lesson
Heroes Around Us
Students select, read about, and report on a hero and then identify how their hero matches certain criteria and characteristics. Hero reports are then compiled into a class book.
Grades
3 - 5
|
Lesson Plan
|
Standard Lesson
Developing Inferential Comprehension Through DL-TA and Discussion Webs
Students will love unwrapping this lesson about before, during, and after reading activities based on Margaree King Mitchell's book, Grandaddy's Gift.
Grades
3 - 6
|
Lesson Plan
|
Standard Lesson
Guided Comprehension: Self-Questioning Using Question-Answer Relationships
Guided comprehension moves your students beyond decoding to become independent readers. Generating questions to guide reading helps readers make connections with the text and supports independent comprehension of new texts.
Grades
9 - 12
|
Lesson Plan
|
Standard Lesson
Persuading an Audience: Writing Effective Letters to the Editor
Students use persuasive writing and an understanding of the characteristics of letters to the editor to compose effective letters to the editor on topics of interest to them.
Grades
6 - 8
|
Lesson Plan
|
Unit
Using Picture Books to Explore Identity, Stereotyping, and Discrimination
Students analyze the concepts of identity, stereotyping, and discrimination by reading picture books; identify how these concepts are dealt with in each book; and discuss concrete actions to stop discrimination.
Grades
6 - 8
|
Lesson Plan
|
Standard Lesson
Breaking Barriers, Building Bridges: Critical Discussion of Social Issues
Through a series of picture book read-alouds, students engage in critical discussion of complex issues of race, class, and gender.
Grades
5 - 9
|
Lesson Plan
|
Standard Lesson
Exploring Perspectives on Desegregation Using Brown Girl Dreaming
Students read and discuss a selection of poems from Jacqueline Woodson's Brown Girl Dreaming to explore varying views on the process of desegregation in America.
Grades
2 - 8
|
Lesson Plan
|
Standard Lesson
Captioning the Civil Rights Movement: Reading the Images, Writing the Words
Teachers guide students to carefully view images from the Civil Rights Movement and write captions that accurately describe the images and/or their probable purposes.
Grades
K - 12
|
Calendar Activity
|
Historical Figure & Event
Rosa Parks was born on this day in 1913.
Rosa Parks was committed to the struggle for social justice and human rights until her death, inspiring millions of people around the world. Today, we celebrate her!