Thurgood Marshall was appointed to the Supreme Court in 1967. 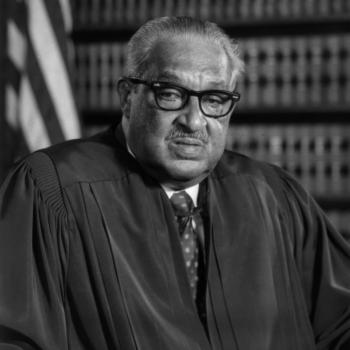 Discuss the following statement by Thurgood Marshall with your students: "If the First Amendment means anything, it means that a state has no business telling a man, sitting alone in his house, what books he may read or what films he may watch." Invite students to think about Marshall's statement by considering each piece of the comment. For instance, begin by reading the First Amendment and talking about the civil rights that the amendment guarantees. After exploring the quotation fully, use K-W-L Creator to complete a K-W-L chart with your students and have them use the resources listed below to begin an investigation.

This site includes biographical and background information on Marshall, as well as details on court decisions he was involved in.

From the US Postal Service, this printable resource includes information about Marshall, a few lessons plans, and a word puzzle.

From the Library of Congress, this page includes a biography of Marshall with links to information on important cases he played a role in, such as Brown v. Board of Education.

Ben's Guide to U.S. Government for Kids provides grade-appropriate information about the Supreme Court and how it works.

Grades
9 - 12
|
Lesson Plan
|
Unit
That's Not Fair! Examining Civil Liberties With the U.S. Supreme Court
Students have the right to have fun in this lesson in which they create a PowerPoint presentation about civil rights and the Supreme Court.
Grades
6 - 8
|
Lesson Plan
|
Standard Lesson
Exploring Free Speech and Persuasion with Nothing But the Truth
Students read Avi's Nothing But the Truth and examine the First Amendment and student rights, and then decide whether the rights of the novel's protagonist, Philip, are violated.
Grades
9 - 12
|
Lesson Plan
|
Standard Lesson
What Are My Rights? Exploring and Writing About the Constitution

Grades
9 - 12
|
Lesson Plan
|
Standard Lesson
Freedom of Speech and Automatic Language: Examining the Pledge of Allegiance
This lesson has students explore freedom of speech by examining the Pledge of Allegiance from a historical and personal perspective and in relationship to fictional situations in novels.
Grades
6 - 10
|
Lesson Plan
|
Standard Lesson
Blending the Past with Today's Technology: Using Prezi to Prepare for Historical Fiction
To prepare for literature circles featuring historical novels, students research the decades of the 1930s to the 1990s and share their information using Prezi, a web application for creating multimedia presentations.
Grades
3 - 8
|
Printout
|
Graphic Organizer
K-W-L Chart
This K-W-L Chart, which tracks what a student knows (K), wants to know (W), and has learned (L) about a topic, can be used before, during, and after research projects.
Grades
3 - 8
|
Printout
|
Graphic Organizer
K-W-L-S Chart
This printable extends the familiar K-W-L's means of organizing students' prior knowledge, formulating inquiry questions, and recording new learning by adding space for questions for further inquiry.
Grades
9 - 12
|
Calendar Activity
|
Historical Figure & Event
Central High School in Little Rock, Arkansas, was integrated in 1957.
After viewing some footage from the actual event, students jot down thoughts and feelings of the Little Rock Nine. Students then write a bio-poem that might have been written by one of these students on this historic day.
Grades
5 - 12
|
Calendar Activity
|
Holiday & School Celebration
Bill of Rights Day is observed.
Students identify a students' rights issue and explore the ways in which the Bill of Rights does protect and does not protect students.
Grades
3 - 8
|
Student Interactive
|
Organizing & Summarizing
K-W-L Creator

This tool allows students to create an online K-W-L chart. Saving capability makes it easy for them to start the chart before reading and then return to it to reflect on what they learned.