Central High School in Little Rock, Arkansas, was integrated in 1957. 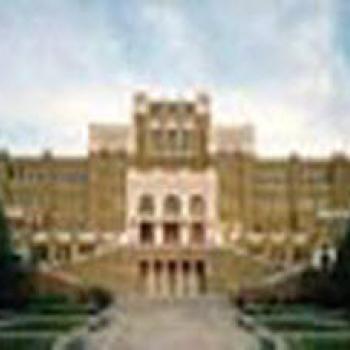 On September 23, 1957, police officers had to be stationed around the Central High School campus to ensure the safety of the Little Rock Nine, a group of nine African American students who were to attend the school and, thus, break the color barrier. The right to an equal education was granted to all African American students by the United States Supreme Court's 1954 decision in Brown v. Board of Education.

Begin by viewing some of the footage from the actual event (you can access some of the footage at the PBS website). Ask students to jot down the thoughts and feelings they think might have been going on in the minds and hearts of the Little Rock Nine. Have students use these notes as the basis for a bio-poem that might have been written by one of the African American students on that historic day.

An alternative activity might be to show students portions of "The Oprah Winfrey Show" that reunited the Little Rock Nine with some of the classmates who threatened and taunted them upon their arrival at Central High School. After viewing each segment, ask students to summarize their reactions to what they have seen and heard on the program. Were they surprised by anything they observed? If so, what surprised them and why?

This site celebrates the 50th anniversary of the integration of Central High School. Links to the historic event are provided, including links to information about the nine African American students who attended the school.

NPR: Looking Back: Brown v. Board of Education

In celebration of the 50th anniversary of the Supreme Court decision that paved the way for the integration of Central High School, NPR compiled an extensive collection of resources, including interviews with Supreme Court Justice Thurgood Marshall.

This Teaching Tolerance page includes resources that focus on primary documents from Brown v. the Board of Education, poetry, arts, and critical thinking. Additional links at the end connect to photographs and more classroom resources.

PBS offers a section on Southern School Desegregation as part of its Eyes on the Prize: American Civil Rights Movement feature.

Grades
4 - 8
|
Lesson Plan
Beyond History Books: Researching With Twin Texts and Technology
Students in grades 4–8 activate prior knowledge and research information about a historic event through fiction and nonfiction literature and exploration of relevant websites.
Grades
9 - 12
|
Lesson Plan
|
Unit
Connecting Past and Present: A Local Research Project
In this unit, students become active archivists, gathering photos, artifacts, and stories for a museum exhibit that highlights one decade in their school's history.
Grades
6 - 8
|
Lesson Plan
|
Standard Lesson
Examining History with Maya Angelou's Poetry

Grades
5 - 9
|
Lesson Plan
|
Standard Lesson
Exploring Perspectives on Desegregation Using Brown Girl Dreaming
Students read and discuss a selection of poems from Jacqueline Woodson's Brown Girl Dreaming to explore varying views on the process of desegregation in America.
Grades
7 - 12
|
Calendar Activity
|
Historical Figure & Event
Thurgood Marshall was appointed to the Supreme Court in 1967.
After discussing a statement made by Thurgood Marshall, students consider each piece of the comment and create a K-W-L chart to begin an investigation with other resources.