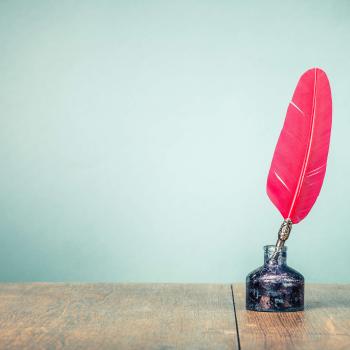 Letter poems are a particularly apt medium for exploring a defining characteristic of poetry—line breaks. As students work to transform narrative-style letters into poetic format, they are forced to think carefully about where to end each line. Students begin by discussing letters they have written and working with an online tool as an introduction to letter poems. As a group, students look at a letter form of “This is Just to Say” by William Carlos Williams and add line breaks to turn it into a poem. They then compare the poem they created with the original, discussing why the poet made the line break choices he did. Next, they work in small groups to rewrite another letter as a poem and then compare the various groups' results with the original poem. Students then use a Venn diagram to compare letters and poems. Finally, they compose their own letter poems.

“This is Just to Say”: William Carlos Williams’ poem is an excellent example of a letter poem.

Letter Poem Creator: This online tool demonstrates for students how to rearrange words from a letter to make a poem.

Dunning and Stafford (1992) assert that: "Poetry is part of everyday life and can be created from everyday experiences, language, and thoughts, as are found in letters." Poetry is made accessible to children by helping them understand its special characteristics and how these work. Poetry celebrates self-expression and can bring much pleasure to readers and writers. Poetry, because it is generally brief and vivid, is appropriate for all children in a classroom, despite diverse reading and writing ability levels. This lesson capitalizes on the students' familiarity with the genre of letters to make poetry more accessible.

Enjoy the spoofs on William Carlos Williams' poetry found in this episode of a Praire Home Companion. Students can then write their own spoofs of Williams' poems. If the entire transcript is not suitable for your classroom, the parodies may work for your students, and the transcript is surely a delight for teachers who know the Williams' poem.

Grades
5 - 8
|
Calendar Activity
|
Author & Text
William Carlos Williams was born in 1883.
Students write imitation poems, review grammatical structures, and use the ReadWriteThink Printing Press or Stapleless Book to publish their finished work.
Grades
K - 12
|
Calendar Activity
|
Literacy-Related Event
United States Congress officially adopted the position of Poet Laureate Consultant in Poetry in 1985.
Students investigate the website of a past Poet Laureate's project and use it as a model to celebrate poetry that appeals most to them.
Grades
6 - 12
|
Professional Library
|
Book
Getting the Knack: 20 Poetry Writing Exercises
Dunning and Stafford, both widely known poets and educators, offer this delightful manual of exercises for beginning poets.
Grades
3 - 12
|
Student Interactive
|
Writing Poetry
Letter Poem Creator
The Letter Poem Creator provides an online model for the thought process involved in creating poems based upon a letter; then, students are invited to experiment with letter poems independently.
Grades
3 - 8
|
Student Interactive
|
Writing Poetry
Line Break Explorer
The interactive explores the ways that poets choose line breaks in their writing. After viewing the demonstration, students are invited to experiment with line breaks themselves.
Grades
K - 12
|
Student Interactive
|
Organizing & Summarizing
Venn Diagram