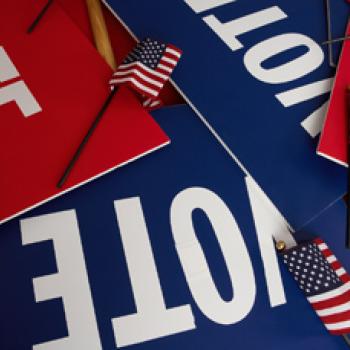 In this lesson, some specific references are made to Brave New World as examples. A text list suggests additional novels, short stories, plays, and movies that will also work for this activity.

In the NCTE publication Lesson Plans for Creating Media-Rich Classrooms, editor Scott Sullivan notes that by "making students aware of the ways information is used and manipulated, we allow them to begin making wiser, more informed choices" (176). Students benefit doubly, then, by studying the concept of propaganda in a traditional literary context and in real-world applications pulled from multimedia sources. Their understanding of the literary text is enriched and enhanced and they are encouraged to "become more informed and conscientious citizens" (174). In this lesson, which encourages students to explore "the intrinsic relationships between content, product [or candidate], and profit [or power], they begin to see that what may once have seemed an objective enterprise [a political campaign] is, in fact, subject to a variety of influences, some subtle, some not" (175).

Election Day is held on the Tuesday after the first Monday in November.