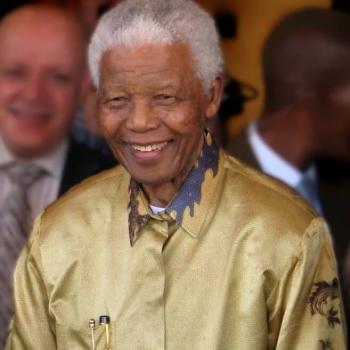 In 2009, the United Nations declared July 18 Mandela Day, an international day of honor for former South African President Nelson Mandela.  Also his birthday, Mandela Day invites everyone, particularly young people, to take action to promote peace and combat social injustice.  According to the official Mandela Day website, Mandela Day "was inspired by a call Nelson Mandela made [in 2008], for the next generation to take on the burden of leadership in addressing the world's social injustices when he said that 'it is in your hands now'."

Familiarize students with Mandela's life and legacy by reading aloud Kadir Nelson's Coretta Scott King Honor book, Nelson Mandela.  Share the illustrations and stop frequently for questions and discussion of Mandela's early life, determination to change social conditions in apartheid-era South Africa, and eventual presidency.  Fill in any gaps with resources from the biographical websites below.

Then explain the purpose and mission of Mandela Day before inspiring students to brainstorm their call to social action by sharing the Take Action page from the Mandela Day website.  There, students will see examples of service projecs around the key themes of awareness building, food security, literacy and education, service and volunteerism, and shelter and infrastructure.

Invite students, as a class or in small groups, to determine a project they can undertake, using resources such as the Letter Generator, Printing Press, and Persuasion Map to plan and publicize their contribution to a more just world.

This site provides a gallery of past and current Mandela Day projects as well as resources for teachers to support students' participation in the Day.

From Mandela's official site, this biography contains text, images, video, sound files and primary source documents to tell the story of his life.

This BBC resource features a timeline with key events, photographs, and videos.

Resouces on this Biography.com on this page are categorized into "In the News" and "History & Culture."

Slate.com offers this collection of annotated photographs of Mandela's life.

Grades
5 - 9
|
Lesson Plan
|
Standard Lesson
Exploring Perspectives on Desegregation Using Brown Girl Dreaming
Students read and discuss a selection of poems from Jacqueline Woodson's Brown Girl Dreaming to explore varying views on the process of desegregation in America.
Grades
6 - 8
|
Lesson Plan
|
Unit
Fighting Injustice by Studying Lessons of the Past
Social injustice occurs every day all over the world. In this lesson, students research a few historical examples of social injustice, including the Holocaust, the Trail of Tears, and Japanese internment.
Grades
7 - 9
|
Lesson Plan
|
Unit
Finding Solutions to Food Waste: Persuasion in a Digital World
Using various reading strategies and resources, students explore the issue of food waste. They also create persuasive arguments and blog posts examining this topic.
Grades
6 - 8
|
Lesson Plan
|
Unit
Giving Voice to Child Laborers Through Monologues
Students present monologues in the "voice" of someone involved in child labor in England, respond to questions, and then discuss contemporary child laborers and compare them to the past.
Grades
9 - 12
|
Lesson Plan
|
Unit
Giving Voice to Students Through "This I Believe" Podcasts
Students write and record their own essays for a class blog by first completing a series of activities designed to get them thinking and writing about their experiences.
Grades
9 - 12
|
Lesson Plan
|
Standard Lesson
I Have a Dream: Exploring Nonviolence in Young Adult Texts

Students will identify how Martin Luther King Jr.'s dream of nonviolent conflict-resolution is reinterpreted in modern texts. Homework is differentiated to prompt discussion on how nonviolence is portrayed through characterization and conflict. Students will be formally assessed on a thesis essay that addresses the Six Kingian Principles of Nonviolence.

Grades
K - 2
|
Lesson Plan
|
Recurring Lesson
Living the Dream: 100 Acts of Kindness
This lesson provides the "action piece" for any study of Dr. Martin Luther King, Jr. In this project, students participate in Dr. King's dream by doing 100 acts of kindness.
Grades
3 - 5
|
Lesson Plan
|
Unit
Moving Toward Acceptance Through Picture Books and Two-Voice Texts
Students read and discuss literature about intolerance and diversity. They work with a partner to write two-voice poems that illustrate situations of intolerance at their school and suggest a step toward acceptance.
Grades
9 - 12
|
Lesson Plan
|
Unit
MyTube: Changing the World With Video Public Service Announcements
This assignment will go viral with students as they think about the meanings of words and images in public service announcements from YouTube before creating a PSA of their own.
Grades
6 - 8
|
Lesson Plan
|
Standard Lesson
Persuading the Principal: Writing Persuasive Letters About School Issues
Students learn that you don't have to raise your voice to raise a point. Writing a persuasive letter to your principal is a great way to get your opinions heard.
Grades
6 - 8
|
Lesson Plan
|
Standard Lesson
Sí, Se Puede: Making a Difference, One Letter at a Time
After reading the book ¡Si, Se Puede!/Yes, We Can!: Janitor Strike in L.A., students learn about labor unions, strikes, and organizing for change. Students interview staff members in their school to learn about their daily work life, and write persuasive advocacy letters.
Grades
7 - 12
|
Calendar Activity
|
Historical Figure & Event
Dr. Martin Luther King, Jr. delivered his "I Have a Dream" speech in 1963.
Students explore the "I Have a Dream" Foundation's website and brainstorm ways they can help themselves or others at their school achieve their educational dreams.
Grades
1 - 12
|
Calendar Activity
|
Holiday & School Celebration
Get ready for National Bullying Prevention Month!
Students create a poster to enter into a poster contest that educates others about issues surrounding bullying.