Music in Our Schools Month is in March. 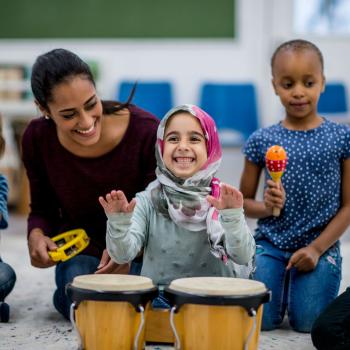 Since 1985, March has been filled with sound as music in our schools is celebrated around the nation. Sponsored by the National Association for Music Education, the event focuses the nation's attention on the need for and benefits of quality music education programs. Schools and community groups celebrate with creative activities and events, based on a designated theme. This year's theme is "Music Inspires"

American film and theater have many examples of musical works that have been adapted from a novel or other non-musical version. Explore the effects of music on a story by examining one example with your class.

Music in Our Schools Month

This site, from NAfME, offers information about the history of Music in Our Schools Month, as well as suggested activities, and advocacy information.

The Kennedy Center's ARTSEDGE provides tools to develop interdisciplinary curricula that integrate the arts with other subjects. Their site offers free standards-based lessons and other student and professional development materials, including Perfect Pitch, an exploration of the orchestra.

This site from the National Arts Centre offers media-rich resources for kids and their teachers and parents related to music and orchestra, including an instrument lab and music library.

Grades
K - 2
|
Lesson Plan
|
Standard Lesson
Using Songwriting to Build Awareness of Beginning Letter Sounds
"Bessie bird lives in a barn" in this lesson in which students create alliterative animal songs to help them learn letter names and consonant sounds and build phonemic awareness.
Grades
3 - 5
|
Lesson Plan
|
Standard Lesson
The Connection Between Poetry and Music
Students won't miss a beat in this reading fluency lesson that combines music and poetry.
Grades
6 - 8
|
Lesson Plan
|
Standard Lesson
On a Musical Note: Exploring Reading Strategies by Creating a Soundtrack
Students create a soundtrack for a novel that they have read, as they engage in such traditional reading strategies as predicting, visualizing, and questioning.
Grades
5 - 10
|
Lesson Plan
|
Standard Lesson
Songs of Our Lives: Using Lyrics to Write Stories
Students learn about the life and music of John Lennon, write a short story from their lives integrating lyrics from some of their favorite songs, and create a class book of stories.
Grades
2 - 3
|
Lesson Plan
|
Unit
Jazz Up Writing Workshop: Writing Biographies of African American Jazz Musicians
During writing workshop, students research, write, revise, and share their own comprehensive biographies of African American jazz musicians.
Grades
4 - 12
|
Calendar Activity
|
Author & Text
Composer and lyricist Stephen Sondheim was born today.

Students examine the painting that inspired Sondheim's Pulitzer-prize winning musical and then create a story of their own based on image they choose.