Patriot Day is celebrated today on the anniversary of the terrorist attacks of 2001. 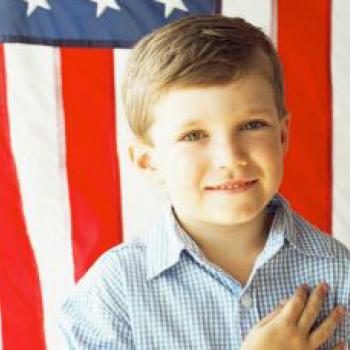 To mark the anniversary of the bombing of the World Trade Center and the Pentagon in 2001, President Bush proclaimed that September 11 be named Patriot Day. On this day, the proclamation asks that flags be flown at half-mast and that the day be marked by ceremonies, candlelight vigils, and other remembrance services.

Even though this day marks the anniversary of a huge disaster, it is called Patriot Day. How does this label change our perceptions about the events of September 11, 2001? Ask students to write their explanation of why this date is now called Patriot Day. An alternative assignment could be to ask students to record their reflections about 9/11. What do they recall about that fateful day? How are their perceptions colored by how the media reported the event? Another alternative might be to explore the various meanings of the word "patriot." Is it possible to be a patriot and still disagree with certain aspects of the government? What is the best way to voice criticism of the government? Perhaps social studies teachers could join in a cross-disciplinary writing assignment about civil disobedience.

This Day in History: September 11

From the American Memory project, this extensive resource provides an explanation of the events with links to photographs, exhibits, and documents preserved in the Library of Congress collection.

This site has collected over 150,000 digital items related to the terrorist attacks of September 11, 2001. Included are emails, images, and first-hand accounts. Because of the nature of the collection, you may want to preview the material before sharing with your students to ensure that the images and text are appropriate for your classroom.

This online exhibit from the National Museum of American History focuses on artifacts related to the attacks and stories that explain the significance of the items. The site includes educational resources and archived professional development sessions.

Grades
3 - 5
|
Lesson Plan
|
Standard Lesson
Wartime Poetry: Working With Similes
Students analyze a photograph, brainstorm words to describe the characters' senses and feelings, work in pairs to describe a character's experience, and create a poem using their ideas and similes.
Grades
6 - 8
|
Lesson Plan
|
Standard Lesson
Heroes Around Us
Students select, read about, and report on a hero and then identify how their hero matches certain criteria and characteristics. Hero reports are then compiled into a class book.
Grades
6 - 8
|
Lesson Plan
|
Standard Lesson
Inquiry on the Internet: Evaluating Web Pages for a Class Collection
Students use Internet search engines and Web analysis checklists to evaluate online resources then write annotations that explain how and why the resources will be valuable to the class.
Grades
8 - 12
|
Lesson Plan
|
Standard Lesson
Responding to Tragedy: Then and Now
After reading several poets' personal responses to the September 11th terrorist attacks, students write a "then and now" poem that puts their early memories of the event in conversation with their current understanding of and response to the tragedy.
Grades
9 - 12
|
Calendar Activity
|
Historical Figure & Event
Pearl Harbor was attacked by the Japanese in 1941.
Students use the Interactive Venn Diagram to compare the bombing of Pearl Harbor to the attacks on America on September 11, 2001.
Grades
9 - 12
|
Professional Library
|
Journal
Sharing Stories and Developing Multiple Perspectives in Post-9/11 Classrooms
Sensitive to the increased importance of valuing diversity and diverse points of view since 9/11, this article describes activities through which ESL students contribute new knowledge to their classes while simultaneously improving their English language skills.