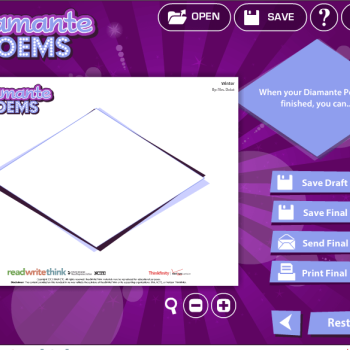 In this online tool, students can learn about and write diamante poems, which are diamond-shaped poems that use nouns, adjectives, and gerunds to describe either one central topic or two opposing topics (for example, night/day or winter/spring). Examples of both kinds of diamante poems can be viewed online or printed out.

Because diamante poems follow a specific format that uses nouns on the first and last lines, adjectives on the second and fourth lines, and gerunds in the third and fifth lines, this tool has numerous word-study applications. The tool provides definitions of the different parts of speech students use in composing the poems, reinforcing the connection between word study and writing. It also includes prompts to write and revise poems, thus reinforcing elements of the writing process. Students can save their draft diamante poems to revise later, and save and print their finished diamante poems.

Grades
3 - 8
|
Printout
|
Writing Starter
Diamante Poem
This tool will allow your students to create a diamante poem by reflecting on their knowledge of a topic and by using nouns, verbs, and adjectives in a creative manner.
Grades
2 - 6
|
Printout
|
Writing Starter
Haiku Starter
This graphic organizer provides students the opportunity to brainstorm words about a given topic, count and record the syllables, and draft a haiku.
Grades
K - 12
|
Calendar Activity
|
Holiday & School Celebration
April is National Poetry Month!

Students often find poetry frustrating and meaningless. By helping students think critically about the differences between poetry and prose, this introduction sets the stage for different strategies for comprehending poetic texts.

What do your students think about each other? Find out as you teach them the concepts of acrostic poems and challenge them to write an uplifting acrostic about a classmate.

Grades
3 - 5
|
Lesson Plan
|
Standard Lesson
All About Alliteration: Responding to Literature Through a Poetry Link

Studied students stupefy! Students learn about alliteration by listening to an alliterative read-aloud and apply the knowledge they gain to the creation of their own poem and illustration.

Shadows, shadows, everywhere! In this lesson, students read fiction, informational text, and poetry about shadows to extend their knowledge of the concept before casting their own shadow poetry.

Students shape up their reading, writing, and listening skills in this lesson by creating original diamante, acrostic, and shape poems about science.

Students create poetry collections with the theme of "getting to know each other." They study and then write a variety of forms of poetry to include in their collections.