Writing a Movie: Summarizing and Rereading a Film Script 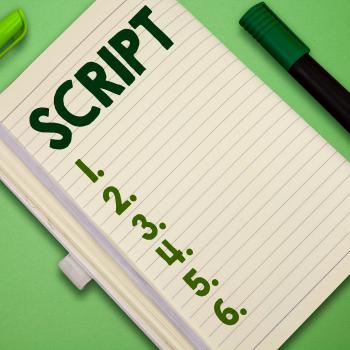 Students are transformed into script writers in this lesson that develops skills in viewing, descriptive writing, and fluency. In this multisession lesson, students view a short film segment that has lots of action and little dialogue. While this lesson uses E.T.: The Extra-Terrestrial, the first 10 minutes of Indiana Jones and the Last Crusade or The Lion King will work nicely with this lesson. As students view the scene in increments, they describe the action of the film as the teacher records the sentences students dictate. After students have watched the scene in its entirety, they listen to a reading of their descriptions and work to improve descriptions and revise any inaccuracies. Students are then assigned parts of the script and perform a dramatic reading of the script as the movie plays in the background. Fluency is key in this lesson because students must match the timing of their reading with the images on the screen.

Writing a Movie provides an opportunity for students to write a description of a film scene and then reread the description to prepare for a schoolwide performance. Students receive feedback on their reading from teachers, classmates, and members of the school community. The rereading takes place in an age-appropriate, purposeful manner and contributes to reading fluency.

Rubric for Writing a Movie

Invite your students to perform their oral reading for other classes in the school. Play the film segment on a large screen as students give a dramatic reading of their script. The opening eight-minute segment of E.T.: The Extra-Terrestrial includes background music that adds to the suspenseful feeling of the film. Let the original audio portion of the film play in the background as students read the parts they have written. The powerful music, exciting visual images, and expressive oral reading by your students will captivate the audience and may motivate other classes to replicate the project.

Student self-assessment. Writing a Movie provides an opportunity for students to work in a cooperative learning situation. Distribute the Rubric for Writing a Movie. Ask each student to reflect upon his or her participation in the activity and use the rubric to rate his or her performance. After completing the rubric, students should discuss their self-assessment with members of their group.

Teacher assessment. Assess the effectiveness of the lesson by asking the following questions:

Grades
7 - 12
|
Calendar Activity
|
Historical Figure & Event
Star Wars creator George Lucas was born in 1944.
Students use the Hero's Journey interactive to describe how Luke Skywalker meets each stage of his journey, and then brainstorm other works that use the formula.
Grades
5 - 12
|
Calendar Activity
|
Historical Figure & Event
The first Academy Awards ceremony was held in 1929.
Students make lists of their favorite and least favorite movies and brainstorm qualities that make a film good or bad. Next, students write a movie review for a film they have seen.
Grades
8 - 12
|
Lesson Plan
|
Standard Lesson
From Text to Film: Exploring Classic Literature Adaptations
Students create storyboards to compare and contrast a book and its film adaptation.